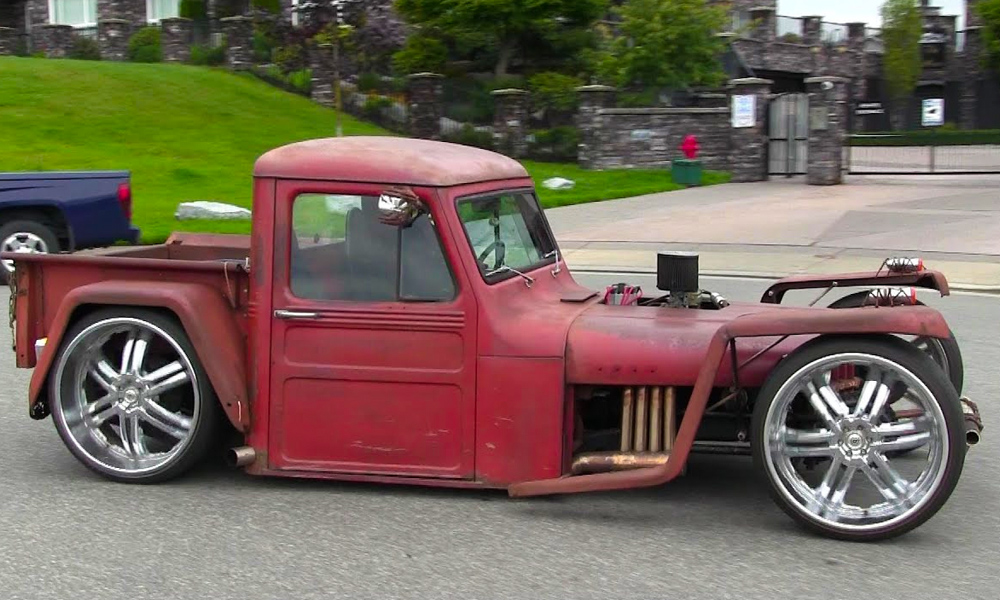 This modified Jeepster is one of the most stunning rat rod cars and trucks we’ve seen on the street. Interviewed by the YouTube channel “Wheels” in 2016, the owner said he spent $13,000 on it, including new parts and a stainless steel fuel tank. However, he notes he uses a GPS for the speed due to the vehicle’s mismatched gauges.

We think the only flaw is perhaps the front fenders need to be stabilized, but it still looks really cool. We mean, just check out those spider headlights and the arm-like parts holding the side-view mirrors.

Another one of the most stunning rat rod cars and trucks is this modified 1948 Ford F-7. If you’re good friends with Shaquille O’Neal or Yao Ming, good news: You just found them a birthday present. Standing at 11 feet, 6 inches tall, and nine feet wide, this 1 truck first existed as a fire truck in Shelby Township, Michigan.

The Willhite family rebuilt it, complete with a big-block Ford V-8, a C6 automatic transmission, and a pair of Rockwell five-ton top-loader axles for all that crazy elevation. Throw in a SCS Gearset transfer case and you’re ready to ride off into the sunset. 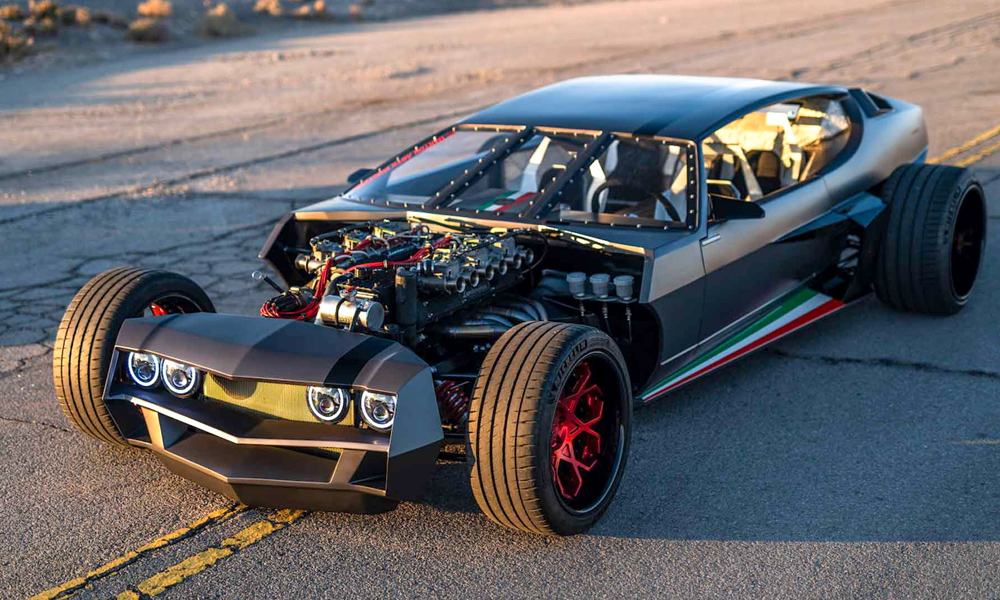 The next on our list of ” Stunning Rat Rod Cars and Trucks Every Gearhead Needs To See”  is the1 968 Lamborghini Espada. We have conflicting feelings on this one. This car received the rad rod treatment in 2018. We do think it looks cool, but who could do this to such as classic? The ones responsible are Danton Art Kustoms, a French tuning house, who decided to implement these “modifications” to celebrate the car’s 50th birthday.

They customized about every part of the vehicle, from the seats to the wheels. This Espada is about 8.2 feet wide, showing off an exposed 3.9-liter V12 engine, which goes around 350bhp. The car went up for sale at Kissimme auction in Florida for $100,000. Despite its rugged design, however, it received no buyers. 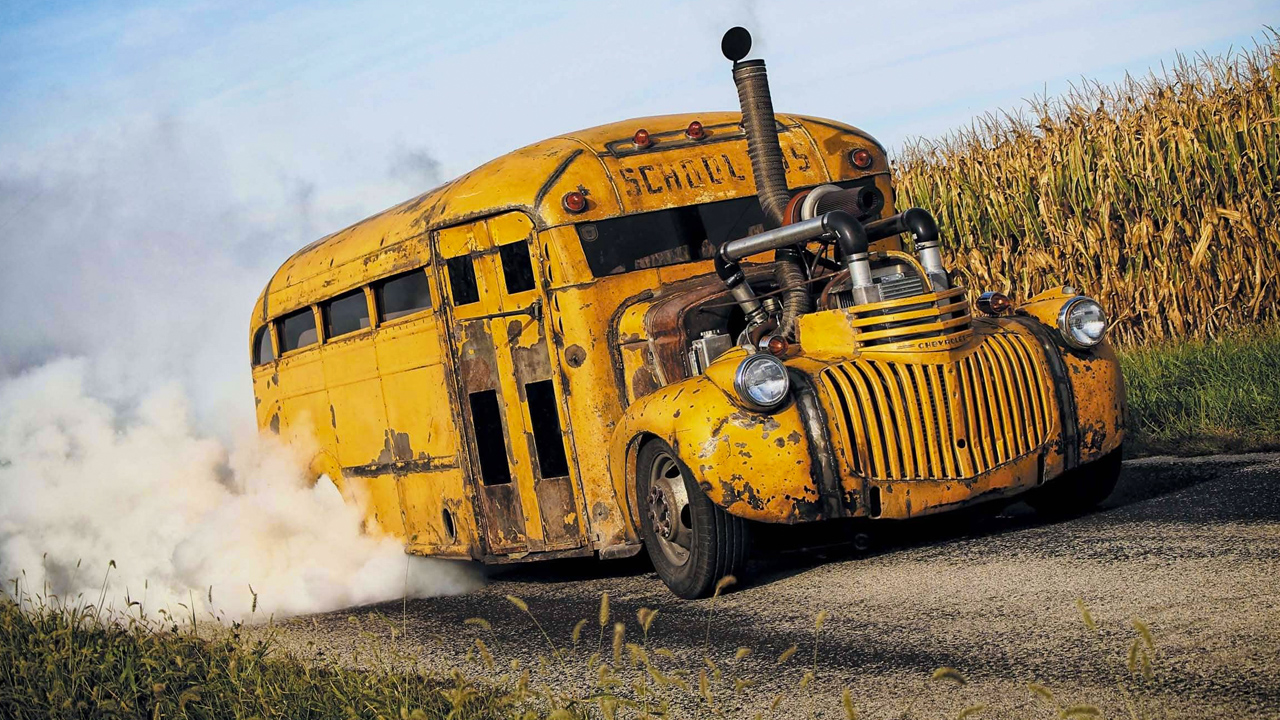 Jason Bliesner is an entrepreneur in Illinois. He owns a bar, car wash and manages rental properties. At some point, Bliesner felt motivated to build a school bus rat-rod. At an auction, he bought a 1941 Chevy bus for $2,700.

He kept its original look but added a 12-valve 8.9L, air-ride suspension, and compound turbos. Bliesner also updated the interiors. The bus gets 15-mpg at 80-mph. Imagine the kid’s reaction if this school bus conversion picked them up in the morning. 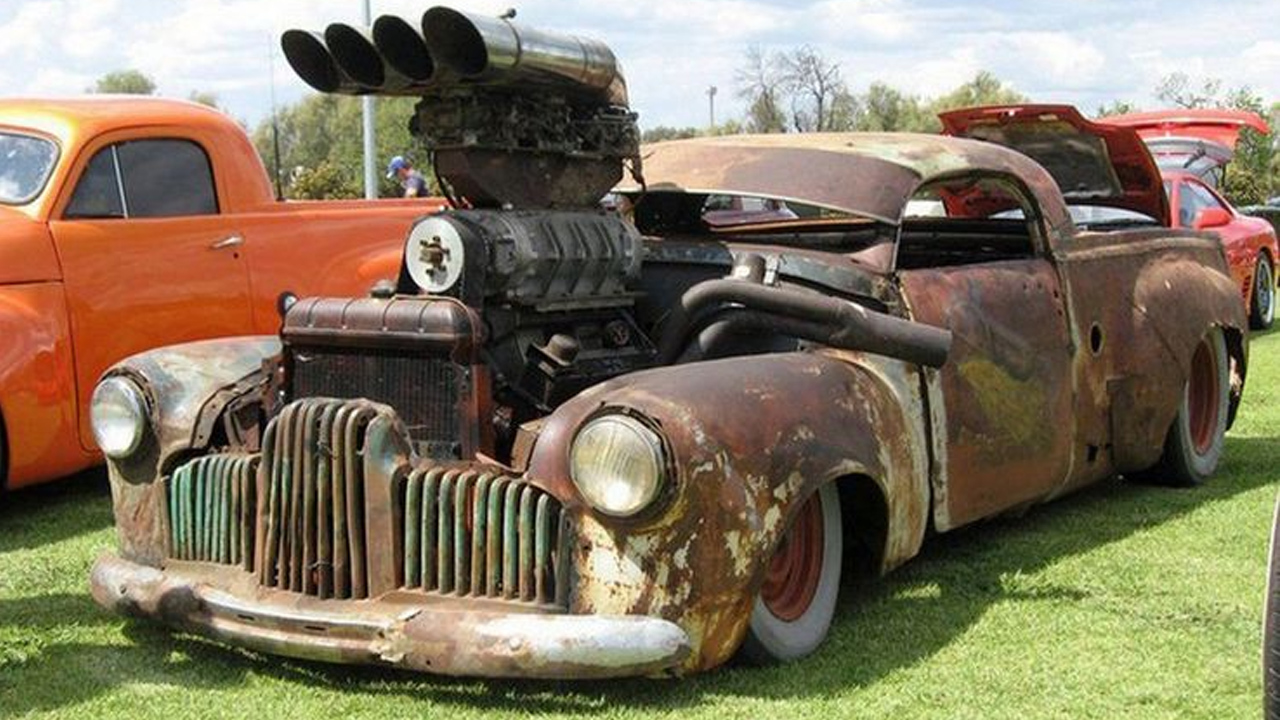 If you’ve seen Mad Max Fury Road, you might be familiar with this one. Nicknamed Crazy Frank, the designers built the car off a Holden FX. It has a four-intake supercharged Chevy V8 combined with a two-speed Powerglide transmission. Snapper also called Colin Jon Macey built the car.

At a car show, some films scouts approached him about buying it. In short, vehicle designer James ‘Johnno’ Johnson said they “simply had to have it” for the movie. We don’t blame them. 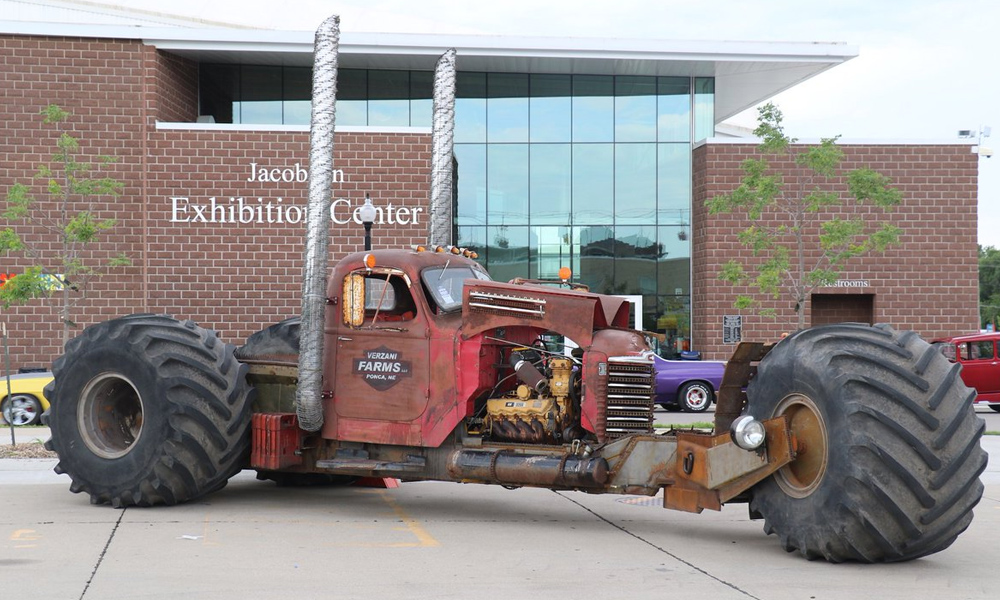 After that last pic, what can we do to top it? The creator of this vehicle designed it for tractor pulls. The monster truck tires, while being aesthetically awesome, have a practical use to give more traction. Another bonus is this car is street legal! We love these awesome car mods! 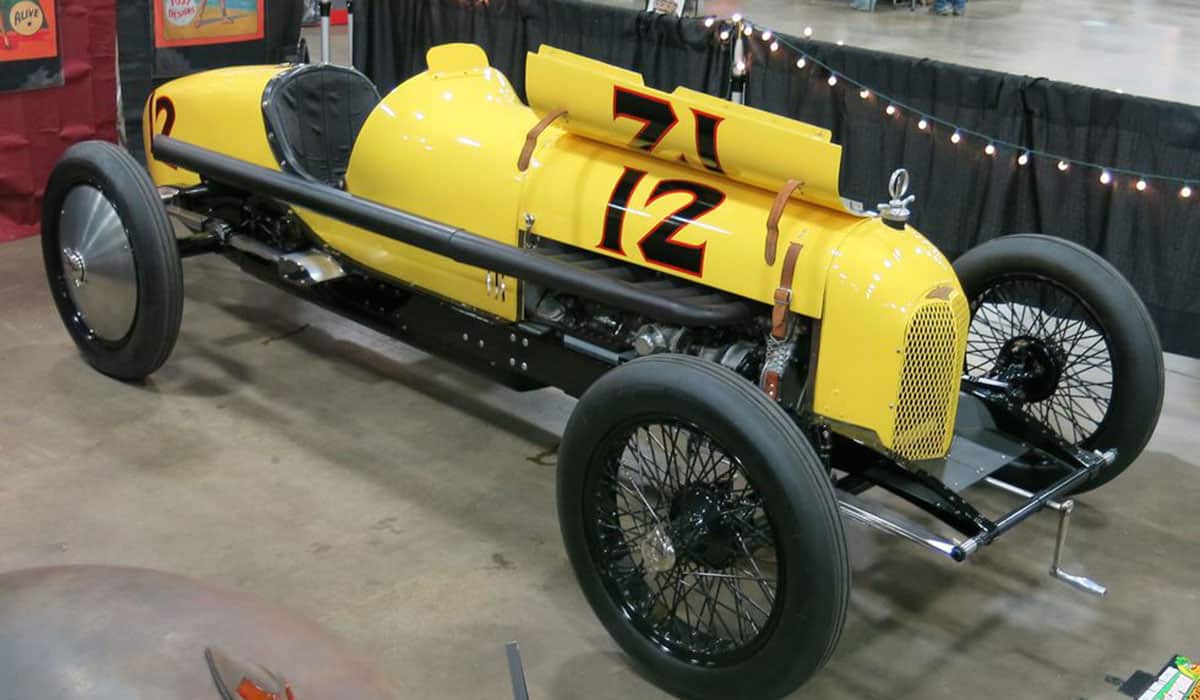 Built by the Duesenberg brothers in 1925, it was given to driver Peter DePaolo, who zoomed his way to victory at the Indy 500, setting a new average speed record of 101.13 miles per hour, which held up for seven years. The engine measured 121.3 cubic inches with a supercharger thrown in that could produce 225 horsepower. This car was on the auction block and expected to fetch $200,000-$275,000, but blew that estimate out of the water, going for a cool $352,000. 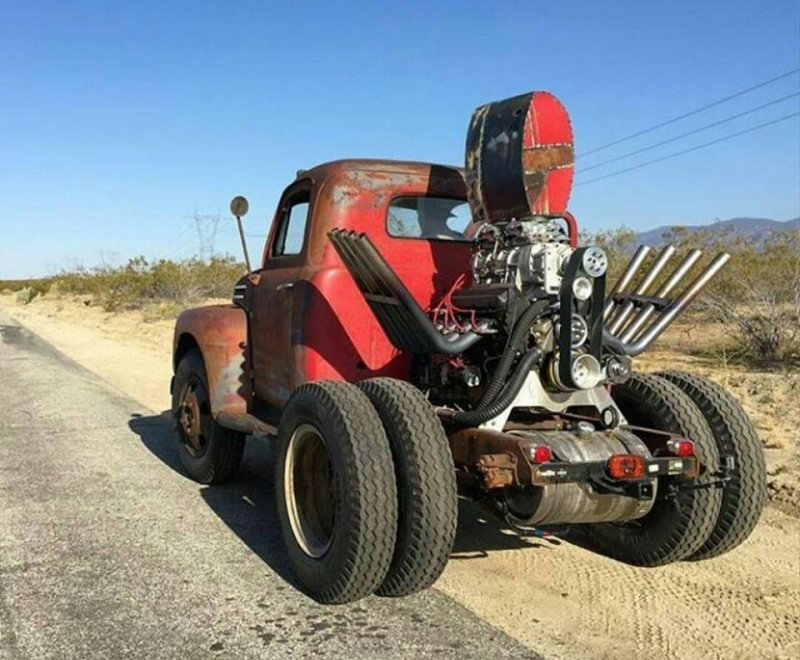 Along with these additions, they used a Hooker weld-up kit for the exhaust, shortened the wheelbase. For the engine to fit, the group had to mount the engine backward, creating the vehicle you see before you. Definitely one of the coolest and oddest trucks on this list.

Check out this rat rod. Matt Groover was the mastermind behind this creation. It is built off a 1964 Cadillac DeVille and contains an AM General M35A2 multi-fuel drive train. In addition to this beast, if you want to see more work by Groover, take a look at his Southern Rust Facebook page. 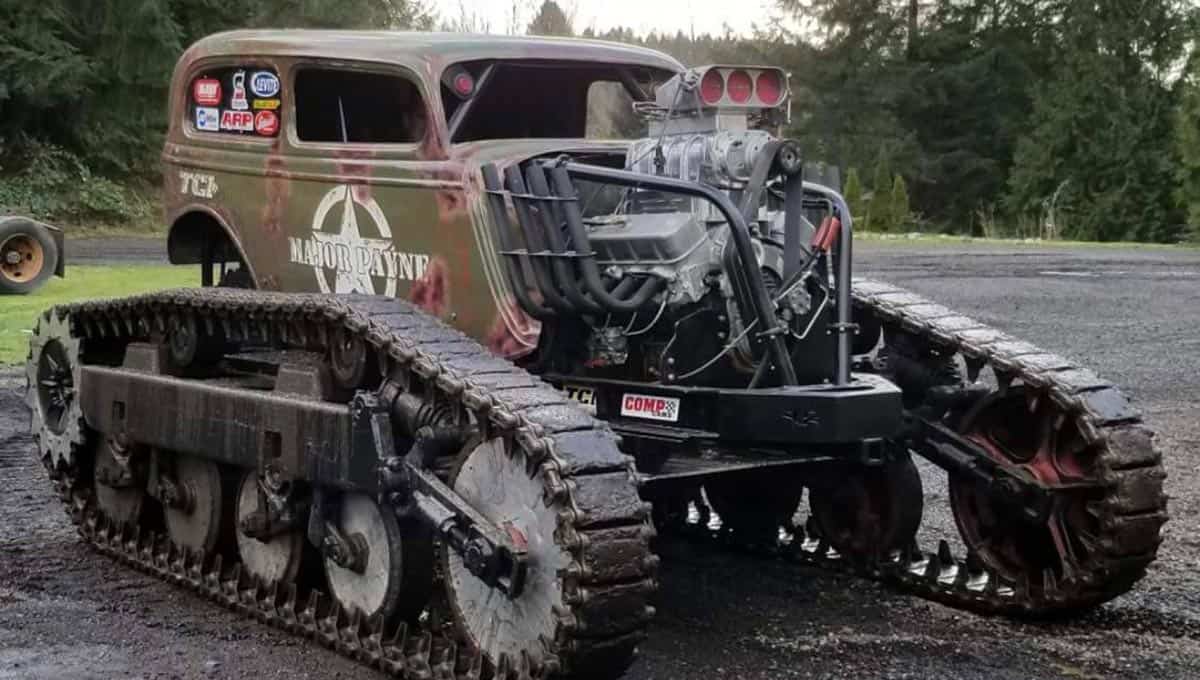 This is why you never say that a hot rod made from a semi is the biggest thing you’ll ever see. Because after that, someone will build one out of a tank. Based on an MS Personnel Carrier, the Major Payne Monster Tank had be originally stripped down to make it anywhere close to qualifying as a rat rod. Its owner stripped 12,000 pounds of steel to make it ready. It runs on brown alcohol and its current owner estimates it’s generating between 1,000 and 1,200 horsepower every time it fires up.

In conclusion, we will say these are some of the coolest and creative cars and trucks out there. We hope you enjoyed these extraordinary rat rod photographs.